Growing up in America I’ve come to terms with the political atmosphere breeding the extremes of rage and/or apathy. The blatant truth is that George Bush wasn’t Hitler. Likewise Barack Obama isn’t Hitler, either. But what if Adolf Hitler did come back, not reincarnated into another figure but as he was in early April 1945?

The first novel of German journalist Timur Vermes addresses just how far celebrity culture has reached. The return of an historical figure to the modern world isn’t a fresh approach to satire. Another such engagement was John Niven’s novel The Second Coming which brought Jesus Christ to the United States. But Vermes’ novel Look Who’s Back drops Hitler off on a patch of grass in Berlin during the August of 2011. He is without memory of killing himself, or of anything else up until he awoke in contemporary times. His looks are spot on, and his demeanor reflects that of Hitler, but he is generally received as an actor who refuses to break character. When interviewed by a talent agency they come to the conclusion that this improv routine isn’t funny. It’s dry, full of historical references, and is delivered with the awkwardness one would expect when engaging in a realistic conversation with Adolf Hitler. He’s no Charlie Chaplin, and he doesn’t bother with slapstick. Even still he is given a chance. Making an appearance on a televised program, Hitler’s rant goes viral, and he becomes a star. It’s through this media platform that Hitler believes he will establish a legitimate following that will enable him to once again take control of Germany.

Before I read the novel I checked out a few message boards to find the grand debate of whether or not Hitler would be an appropriate figure from which to derive satirical comedy. It’s strange how that online conversation seemed to be one of the central themes, and how closely it reflected the individuals within that debate. The older generation that had lived through the atrocities of Hitler’s Germany has been left reasonably haunted to such an extent that it’s just not appropriate. In the novel Hitler’s personal assistant quits her job when her grandmother becomes aware of whom she’s working for and declares, “What that man does is not funny. It’s nothing to laugh about.” Yet it was Hitler’s unorthodox approach that gets him threatened and assaulted by real Nazi loyalists. Comedy and satire has the capability to undermine the authority of tyrannical figures, but it happens to be those hurting the most who have the hardest time facing it in any light. It appears as though if Hitler were to come back in such a fashion, he’d resemble Stephen Colbert more than any politician. In spite of this new life path Hitler maintains his goals of world domination and German superiority in the face of those under the impression that it’s all an act. 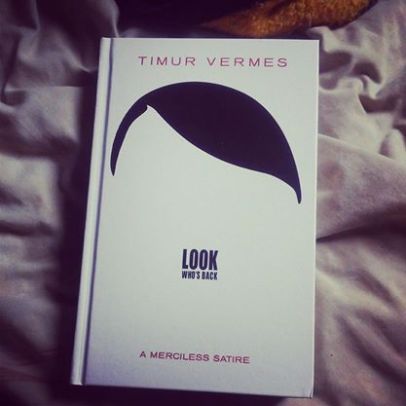