A few years back I watched a video where black children were presented with baby dolls. One doll had a black skin tone, and the other white. The children were then asked questions that sought to have them pass judgment as it appealed to their preferences. Across the board, when they were asked which was the ‘good’ or ‘pretty’ doll, their answers indicated the white doll met that criterion. When asked which doll was ‘bad’ or ‘ugly’ the black children consistently decided upon the black doll.

I’m white, and that video was painful to watch. Their answers suggested a deep-rooted self-loathing/hatred that’s socially programmed at an age too early to repair. My heart sank with their honest opinion based answers.

When I came upon The Bluest Eye by Toni Morrison, I was somewhat familiar with the premise; the story of a black girl named Pecola Breedlove who abhors her blackness, and desires the white traits of what she believes constitutes beauty. She covets the likeness of Shirley Temple, damaging any hope of finding self-love in her blackness. But what complicates Pecola is not grounded in isolation. There’s a passage that reminded me of the video on doll preference. When a few black boys begin to bully Pecola, Morrison’s narrator observes,

“It was their contempt for their own blackness that gave the first insult its teeth. They seemed to have taken all of their smoothly cultivated ignorance, their exquisitely learned self-hatred, their elaborately designed hopelessness and sucked it all up into a fiery cone of scorn that had burned for ages in the hollows of their minds-cooled-and spilled over lips of outrage,” (65)

What makes Morrison’s work so intriguing (aside from a style of prose that hooks) is her ability to create backstories for a larger community. Morrison creates a bigger picture, before zeroing in on her focus. She’ll use entire chapters to establish other characters, bringing their obscure silhouettes to the forefront. Pauline Breedlove is the mother of Pecola, and as her past is brought up to speed we’re left to reflect, “So she became, and her process of becoming was like most of ours: she developed a hatred for things that mystified or obstructed her; acquired virtues that were easy to maintain; assigned herself a role in the scheme of things; and harked back to simpler times for gratification” (126).

The Bluest Eye examines race, gender, and class with tragic elements in such a masterful way as to stimulate empathy and arouse social questions. Why do we permit such injustice? Why do we hurt ourselves and/or the ones we’re supposed to love? The prose is an examination of trauma and living in its aftermath. I will be reading more of Toni Morrison, as her literary quality is top shelf material. 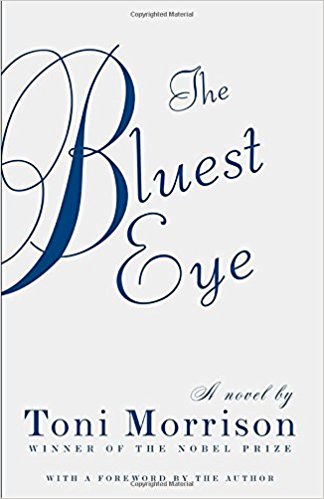