Controversy was bound to appear as a misguided attempt to push magazines with the current issue of Rolling Stone featuring Jahar Tsarnaev on the cover. Following the backlash, the magazine stands by their decision to put the most appealing photograph of the surviving Boston Marathon bomber on their cover instead of a music artist, actor, or hell I’d settle for a Kardashian. When one is concerned with only the moving of units, I understand completely why they opted not to have Jay-Z or Willie Nelson (both artists had articles dedicated to them within the issue) gracing the cover. At this point, the top people at Rolling Stone are most likely euphoric in that they’re at least being talked about.

I have a subscription to Rolling Stone and was excited that the controversy had taken to the internet before my copy had arrived in the mail. Since then I’ve heard a number of friends express outright disgust to apathy and I can hardly blame them in holding such opinions. I even had a guest overlook the issue, figuring the shaggy hair covering those pixilated eyes had simply belonged to another singer/songwriter/John Mayer type until I brought it up for the sake of conversation. Seeing as how I’m not one to take the moral high ground, I’ll leave it to Marilyn Manson.

“A lot of people forget or never realize that I started my band as a criticism of these very issues of despair and hypocrisy. The name Marilyn Manson has never celebrated the sad fact that America puts killers on the cover of Time magazine, giving them as much notoriety as our favorite movie stars. From Jesse James to Charles Manson, the media, since their inception, have turned criminals into folk heroes. They just created two new ones when they plastered those dip-shits Dylan Klebold and Eric Harris’ pictures on the front of every newspaper. Don’t be surprised if every kid who gets pushed around has two new idols.”

As an angry kid who got pushed around when Columbine happened, I’ll be the first to admit that I in fact, had two new idols for a short period of time. Maturity would change that, but middle school was a trying time.

I’m reminded of the Columbine shooters getting their pictures on the cover of Time Magazine. I’m reminded of the intimidating images of an armed to the teeth Seung-Hui Cho being plastered everywhere following the massacre at Virgina Tech (from pictures and videos that he shot and personally mailed to NBC with the intent of obtaining such notoriety). I was surprised and relieved to find that the Sandy Hook shooter was only on the cover of tabloids. Marilyn Manson was (and is still) right in that the media glorifies those with the most blood on their hands. The definition of irony rests within the article they published in 1999, and the cover of the current issue. The greatest concern of this particular incident of homicidal glorification is that instead of an otherwise pointless school shooting, the motives behind Jahar’s crimes were that of religious extremism. I personally fear that his sort of behavior coupled with the embrace of the media frenzy will again influence and enable disenfranchised youth with a more extensive list of excuses. 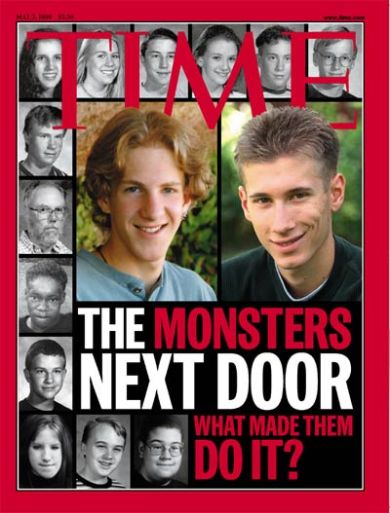 Here’s a link to Manson’s article in case you were wanting to read further.