The author who had sparked my love of reading in the second grade has finally gotten around to producing a novel for adults. R. L. Stine’s Red Rain seems like a nostalgic tour of a place forgotten, as his writing is so familiar, and yet something is different as the idea of horror has changed with maturity. Graphic violence, sexual situations, and the occasional cluster of curse words define the main difference as Stine’s style does not seem to have changed much since the last time I picked up one of his books fifteen+ years ago. Even while approaching close to 400 pages, Red Rain is a quick, easy, and fun read.

It’s quite fitting to note that the author who has made his career writing horror novels for children would have evil children headline as the topic of his first horror novel for adults. On the Acknowledgements page, Stine expresses that he was influenced by the film adaptation of Stephen King’s Children of the Corn, which becomes somewhat obvious over the course of the story.

In the aftermath of a deadly hurricane, travel blogger Lea Sutter adopts twin boys on a whim. Seems a a bit of a stretch, but that does get cleared up as things progress. Lea’s husband, Mark and two biological children aren’t quite as enthused by the new additions to their family, but they try to make the best of it until the twins bring out the worst in them.

Murders are committed and evidence suggests Mark is the culprit. Things spiral out of control even further as the town’s children go missing overnight.

I’ll spoil no more than that. Enjoy. 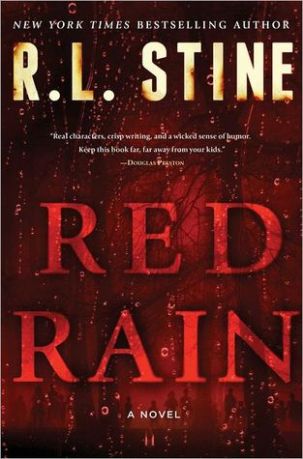